Graham Moore at the Oscars 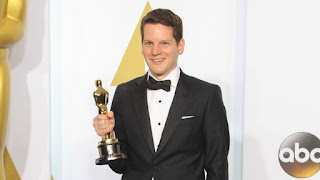 I wanted to type this post out while my thoughts/ emotions were still fresh in my mind. Mom and I watched the Oscars tonight- overall, it was probably one of the best award shows I've seen in awhile! Lady Gaga's tribute to "The Sound of Music" was flawless, Jared Leto looked incredible in that light blue suit, and Eddie Redmayne is one of my new favorite people thanks to his amazing acceptance speech. But the one moment that really hit home for me was Graham Moore's speech.

Let backtrack for a second- I saw The Imitation Game opening weekend. Honestly, there were two reason I wanted to see this film: 1) I love British history, and 2) Benedict Cumberbatch (need I say more?). This movie quickly became one of my new favorites. It's such an inspiring, shocking, and eye-opening looking into the role of British intelligence in World War II, and the life of Alan Turing. I'm not an overly-emotional person, but I was in tears by the end of the movie. I thought this film was absolutely brilliant, and I can wait to watch it again once it's out on DVD.

Just wanted to give you a little backstory before I got to the main part of the post. Ok, now back to the point. Graham Moore wrote the screenplay for The Imitation Game, and gave one of the most memorable acceptance speeches I've ever heard. Here's the main part of his speech:

-----
When I was 16 years old, I tried to kill myself because I felt weird and I felt different and I felt like I did not belong. And now, I'm standing here and I would like for this moment to be for that kid out there who feels like she's weird or she's different or she doesn't fit in anywhere. Yes, you do, I promise you do. You do. Stay weird, stay different. And then, when it's your turn and you are standing on this stage, please pass this same message to the next person who comes along.
-----

I immediately started crying. Like I said, I'm not an emotional person (in most cases); this really hit me, though. I've fought through depression and battled suicidal thoughts. It takes a lot of courage for someone to admit they've been through something like that. I truly don't have the words to express just how much his speech has inspired me. I know it sounds cheesy and cliche, but he's a hero in my book.

He reminded me to keep my head up and keep moving forward. My life is worth living, and I shouldn't let anything- especially something like suicide and depression stop me from achieving my dreams. Again, cliche, but 100% true.

-----
Thank you for reading this random post. Sometimes, I just need to write stuff down so I can save it and (maybe) reflect on it later.