Yep, you read the title right- I got another tattoo. Surprise, surprise! If you've been following me for a few month (or have read any of my posts from late 2014), you'll know that I'm absolutely 100% addicted to tattoos. I don't know what is so addictive about tattos... Maybe the adrenaline rush? Either way, tattoos are a form of art (in my opinion), and I wear mine proudly :)

Anyways, let's get to the point of this post, shall we? I wasn't really planning on getting a new tattoo until my birthday. But, but brother went in for his first tattoo and asked me to go with him. He got the same lyric I have on my right forearm: 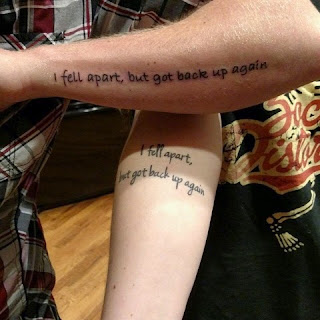 "I fell apart, but got back up again" from the Thirty Seconds to Mars song, "Alibi." Drew and I have both been through some tough times and have overcome a lot in the past few years. He's a tough kid!! I normally hate matching tattoos, but since this song means so much to both of us, I absolutely love it. I like that his font is similar to mine, but not exactly the same. I love my brother; I'm so proud of him and all his accomplishments!

So, while he was getting that done, I was contemplating my next tattoo. Brian had time for another tattoo before the shop closed (my regular guy, Jimmy, was completely booked), so I got this: 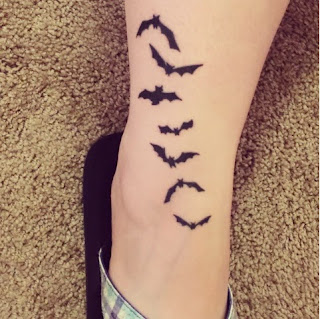 Seven little bats on my foot/ ankle. I love them!!!! This is my third Avenged Sevenfold inspired tattoo. If you're familiar with the band, you've probably heard the song "Bat Country" at some point. There are some bats flying around in the music video, so I figured, why not get bats on my foot? Sounds awesome to me!

PS- the music video is super trippy and amazing. Syn's solo is flawless and Zacky looks so sexy with his long hair and snake bites. Just sayin.

PSS- the band took inspiration from Hunter S Thompson's Fear and Loathing in Las Vegas for the song and music video. So, this tattoo is kind of a literature and music themed tattoo. Two of my favorite things in life are books and metal music.

Honestly, this was the most impulsive tattoo I've ever gotten, but I couldn't be happier with how this one turned out :) Brian did an amazing job!!

Side note/ funny story time:
Adam (and Jimmy and Brian, but mostly Adam) hates doing bird tattoos. You know the birds every girl seems to have/ want? He dubbed them the "Pinterest basic bitch birds." I was talking to the front counter girl, Britani, and we decided to call my bats the "basic bitch bats" in honor of Adam's hatred for all things basic.

-----
Thank you for keeping up with my tattoo obsession!! Hope to talk to you again soon :)