Before I even get started let me just say this: I am not going to state my opinion on the situation in Syria. I don't want to offend or upset anyone, and I really don't want to start a debate/ argument over something that I cannot change. Everyone is entitled to their own opinion, but I don't wish to state mine at this point in time.

That being said, I came across this interesting article on Facebook. My high school World History teacher shared it on her wall, and asked everyone to take a few minutes to read it. The article, a statement from Vladimir Putin, is addressed to the American people. He goes into a little bit of detail about the situation in Syria, but he mainly focuses on what plan of action would most effectively end the violence in the country. I'll let you read it for yourself before I say anything else.

﻿
This has to be the most interesting article I've read concerning the chemical warfare being used in Syria.  Again, without saying too much, this quote really struck a chord with me: "A strike would increase violence and unleash a new wave of terrorism."  However you feel about the current events taking place in Syria, I urge you to read the article.  Whether you agree or disagree with him, Putin gives us a new perspective on the incident and offers the world a solution to the problem.
Please don't think I'm pushing my political view on you in any way.  After reading this article, I felt enlightened on the situation.  If you haven't watched President Obama's address to the nation (from 9/12/2013), you can watch a video of that here.  It's a bit long, but, again, I think it's worth watching.
Hope this helps you become more informed on current world events.  Thanks for reading, and I hope to talk to you guys again soon :)
Keri <3
Posted by Keri at 4:48 PM No comments:

Email ThisBlogThis!Share to TwitterShare to FacebookShare to Pinterest
Labels: update

Today's post is going to be very different from all of my other posts thus far. I want to discuss the events that took place on 9-11-2001.

As an American, it's hard to think about those events without feeling an array of emotions- anger, sadness, a sense of loss, depression, fear. I cried when I woke up this morning, not for my own loss, but for the loss and suffering millions of people throughout the US. We, as a country, suffered tremendously after the attacks on the Pentagon and the World Trade Center. However, I also feel a sense of pride: the men and women on United 93 made their country so proud. They were the heroes of 9-11.

I remember where I was and what I was doing when I heard the news. My third grade class was in the middle of our weekly spelling quiz before my teacher got a phone call. He immediately turned on the television, and we watched the events unfold. The first tower had already been hit, and we watched, in fear, as the next plane crashed into second tower. All the students in the school were asked to wait in the cafeteria until our parents could pick us up; my mom was at the school in a matter of minutes, and took my brother and I home.

I remember being confused and terrified. Being so young, I wasn't exactly sure what was going on, but I knew something was very wrong. I saw my dad sitting on the couch when I got home, and asked him what had happened. Him and my mom explained everything to my brother and I, but it was still difficult to understand the magnitude of what had happened in New York. My mom called my aunt (who lived in NYC and worked less than 5 blocks away from the Twin Towers), to make sure she was ok. Her and her family were alright, but extremely shaken and in a state of utter shock. Who would do this? And why? I couldn't comprehend it at the time.

My family kept the news on for the rest of the day. We later found out another plane had crashed into the Pentagon, and another, headed for the White House, was grounded in a field in Pennsylvania. I don't remember much else, but what I do remember is vivid and will be etched in my memory forever.

About a month before the attacks, we had flown to New York for my aunt's wedding. We had seen the Twin Towers from a distance. A year and some months after 9-11, my mom and I visited NYC for my birthday. Ground Zero, the site where the towers had once stood, was almost completely cleared of rubble and debris. We drove by a chain link fence where children and adults had pinned thank you cards to it. Some were tributes to family member and friends, while others were from one stranger to another. It was at this point I realized that these attacks, no matter how traumatic, had brought the country together. I remember hearing the song "I Am Proud To Be An American" on almost every street corner. The song still brings me to tears because of this memory.

We grew strong once again, even though the War on Terror raged in the Middle East. I was never in support of the war, but I understand why it had to happen. We couldn't stand by and let another country terrorize the American people; we had to act.

I still can't believe 12 years have passed since that day. It's hard for me to believe, even now, that the towers are gone and so many lives were lost in a matter of hours. 9-11-2001, the day that will live in infamy forevermore.

Take some time- even if it's only a few minutes- to tell your friends and family that you love them. Make an effort to help the men and women that serve this great country. Donate blood, money, time, or whatever you can. Make a difference in someone's life.

"United we stand, divided we fall." 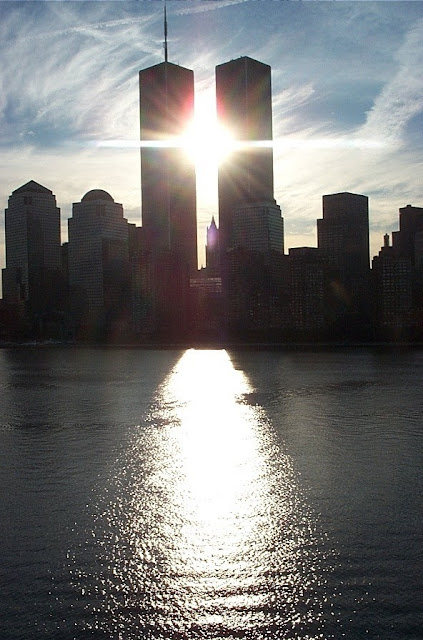