I have to admit, I've never seen a single episode of Gilmore Girls (but it is in my Netflix queue!)... But, I have seen this pin floating around on Pinterest of the Rory Gilmore Reading Challenge.  Apparently, someone listed all the books that she reads or mentions throughout the entire series.  There is a grand total of 339 on the list!  That's a lot of books!!

One of my New Year's resolutions is to read more books, and just become more "well read" in general.  I thought this list was a good place to start.  I've looked it over, and it has a bunch of classics and well-known literary works that I probably should have read at some point in high school/ college.  Either way, I hope to finish this list some time in the near future, but it probably won't happen within one year (actually, I can almost guarantee you it won't happen this year).  But, I am going to keep an ongoing list and check each book off as I go.

Let's get started on this insane reading challenge! 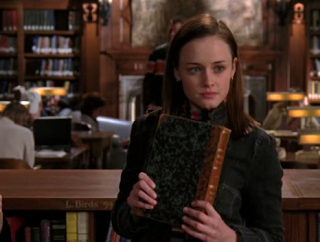 Quick notes- I have bolded the titles that I've read, and these books are in alphabetical order by title (not author).

1. 1984 by GeorgeOrwell
2. Adventures of Huckleberry Finn by Mark Twain
3. Alice in Wonderland by Lewis Carroll
4. The Amazing Adventures of Kavalier & Clay byMichael Chabon
5. An American Tragedy by Theodore Dreiser
6. Angela’s Ashes by Frank McCourt
7. Anna Karenina by Leo Tolstoy
8. The Diary of a Young Girl by Anne Frank
9. The Archidamian War by Donald Kagan
10. The Art of Fiction by Henry James
11. The Art of War by Sun Tzu
12. As I Lay Dying by William Faulkner
13. Atonement by Ian McEwan
14. Autobiography of a Face by Lucy Grealy
15. The Awakening by Kate Chopin
16. Babe by Dick King-Smith
17. Backlash: The Undeclared War Against American Women by SusanFaludi
18. Balzac and the Little Chinese Seamstress by DaiSijie
19. Bel Canto by Ann Patchett
20. The Bell Jar by Sylvia Plath
21. Beloved by Toni Morrison
22. Beowulf: A New Verse Translation by Seamus Heaney
23. The Bhagava Gita
24. The Bielski Brothers: The True Story of Three Men Who Defied theNazis, Built a Village in the Forest, and Saved 1,200 Jews by PeterDuffy
25. Bitch in Praise of Difficult Women byElizabeth Wurtzel
26. A Bolt from the Blue and Other Essays by MaryMcCarthy

27. Brave New World by AldousHuxley
28. Brick Lane by Monica Ali
29. Bridgadoon by Alan Jay Lerner
30. Candide by Voltaire
31. The Canterbury Tales by Chaucer
32. Carrie by Stephen King
33. Catch-22 by Joseph Heller
34. The Catcher in the Rye by J. D. Salinger
35. Charlotte’s Web by E. B. White
36. The Children’s Hour by Lillian Hellman
37. Christine by Stephen King
38. A Christmas Carol by Charles Dickens
39. A Clockwork Orange by Anthony Burgess
40. The Code of the Woosters by P.G. Wodehouse
41. The Collected Stories by Eudora Welty
42. A Comedy of Errors by William Shakespeare
43. Complete Novels by Dawn Powell
44. The Complete Poems by Anne Sexton
45. Complete Stories by Dorothy Parker
46. A Confederacy of Dunces by John Kennedy Toole
47. The Count of Monte Cristo by Alexandre Dumas
48. Cousin Bette by Honore de Balzac
49. Crime and Punishment by Fyodor Dostoevsky
50. The Crimson Petal and the White by Michel Faber
51. The Crucible by Arthur Miller
52. Cujo by Stephen King
53. The Curious Incident of the Dog in the Night-Time by MarkHaddon

81. Eva Luna by IsabelAllende
82. Everything Is Illuminated by Jonathan Safran Foer
83. Extravagance by Gary Krist
84. Fahrenheit 451 by Ray Bradbury
85. Fahrenheit 9/11 by Michael Moore
86. The Fall of the Athenian Empire by Donald Kagan
87. Fat Land: How Americans Became the Fattest People in the World by GregCritser
88. Fear and Loathing in Las Vegas by Hunter S. Thompson
89. The Fellowship of the Ring by J. R. R. Tolkien
90. Fiddler on the Roof by Joseph Stein
91. The Five People You Meet in Heaven by MitchAlbom
92. Finnegan’s Wake by James Joyce
93. Fletch by Gregory McDonald
94. Flowers for Algernon by Daniel Keyes
95. The Fortress of Solitude by Jonathan Lethem
96. The Fountainhead by Ayn Rand
97. Frankenstein by Mary Shelley
98. Franny and Zooey by J. D. Salinger
99. Freaky Friday by Mary Rodgers
100. Galapagos by Kurt Vonnegut
101. Gender Trouble by Judith Butler
102. George W. Bushism: The Slate Book of the Accidental Wit and Wisdomof our 43rd President by Jacob Weisberg
103. Gidget by Fredrick Kohner
104. Girl, Interrupted by Susanna Kaysen
105. The Gnostic Gospels by Elaine Pagels
106. The Godfather: Book 1 by Mario Puzo

107. The God of Small Things byArundhati Roy
108. Goldilocks and the Three Bears by Alvin Granowsky
109. Gone with the Wind by Margaret Mitchell
110. The Good Soldier by Ford Maddox Ford
111. The Gospel According to Judy Bloom
112. The Graduate by Charles Webb
113. The Grapes of Wrath by John Steinbeck
114. The Great Gatsby by F. Scott Fitzgerald
115. Great Expectations by Charles Dickens
116. The Group by Mary McCarthy
117. Hamlet by William Shakespeare
118. Harry Potter and the Goblet of Fire by J. K.Rowling
119. Harry Potter and the Sorcerer’s Stone by J. K.Rowling
120. A Heartbreaking Work of Staggering Genius by DaveEggers
121. Heart of Darkness by Joseph Conrad
122. Helter Skelter: The True Story of the Manson Murders byVincent Bugliosi and Curt Gentry
123. Henry IV, part I by William Shakespeare
124. Henry IV, part II by William Shakespeare
125. Henry V by William Shakespeare
126. High Fidelity by Nick Hornby
127. The History of the Decline and Fall of the Roman Empire by EdwardGibbon
128. Holidays on Ice: Stories by David Sedaris
129. The Holy Barbarians by Lawrence Lipton
130. House of Sand and Fog by Andre Dubus III
131. The House of the Spirits by Isabel Allende
132. How to Breathe Underwater by Julie Orringer

133. How the Grinch Stole Christmas by Dr.Seuss
134. How the Light Gets In by M. J. Hyland
135. Howl by Allen Ginsberg
136. The Hunchback of Notre Dame by Victor Hugo
137. The Iliad by Homer
138. I’m With the Band by Pamela des Barres
139. In Cold Blood by Truman Capote
140. Inferno by Dante
141. Inherit the Wind by Jerome Lawrence andRobert E. Lee
142. Iron Weed by William J. Kennedy
143. It Takes a Village by Hillary Rodham Clinton
144. Jane Eyre by Charlotte Bronte
145. The Joy Luck Club by Amy Tan
146. Julius Caesar by William Shakespeare
147. The Jumping Frog by Mark Twain
148. The Jungle by Upton Sinclair
149. Just a Couple of Days by Tony Vigorito
150. The Kitchen Boy: A Novel of the Last Tsar by RobertAlexander
151. Kitchen Confidential: Adventures in the Culinary Underbelly byAnthony Bourdain
152. The Kite Runner by Khaled Hosseini
153. Lady Chatterleys’ Lover by D. H. Lawrence
154. The Last Empire: Essays 1992-2000 by GoreVidal
155. Leaves of Grass by Walt Whitman
156. The Legend of Bagger Vance by Steven Pressfield
157. Less Than Zero by Bret Easton Ellis
158. Letters to a Young Poet by Rainer Maria Rilke
159. Lies and the Lying Liars WhoTell Them by Al Franken
160. Life of Pi by Yann Martel
161. Little Dorrit by Charles Dickens
162. The Little Locksmith by Katharine ButlerHathaway
163. The Little Match Girl by Hans Christian Andersen
164. Little Women by Louisa May Alcott
165. Living History by Hillary Rodham Clinton
166. Lord of the Flies by William Golding
167. The Lottery: And Other Stories by Shirley Jackson
168. The Lovely Bones by Alice Sebold
169. The Love Story by Erich Segal
170. Macbeth by William Shakespeare
171. Madame Bovary by Gustave Flaubert
172. The Manticore by Robertson Davies
173. Marathon Man by William Goldman
174. The Master and Margarita by Mikhail Bulgakov
175. Memoirs of a Dutiful Daughter by Simone de Beauvoir
176. Memoirs of General W. T. Sherman by William Tecumseh Sherman
177. Me Talk Pretty One Day by David Sedaris
178. The Meaning of Consuelo by Judith Ortiz Cofer
179. Mencken’s Chrestomathy by H. R. Mencken
180. The Merry Wives of Windsor by William Shakespeare
181. The Metamorphosis by Franz Kafka
182. Middlesex by Jeffrey Eugenides
183. The Miracle Worker by William Gibson
184. Moby Dick by Herman Melville

Thanks for keeping up with my progress on this reading challenge.  Check back soon for more updates and new posts :)